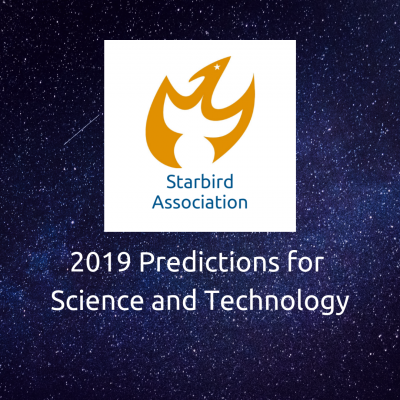 As we move into 2019, let’s take a peek at some of the predictions for science, technology, engineering and math (STEM) and aerospace. NBC News recently did a great article on some of these predictions. Let’s check out some of the highlights:

Brain-computer interfaces finally arrive for those in need. Prosthetic limbs will not only be controlled by a paralyzed patient’s thoughts, but also be capable of sensing and feeling the same way our natural limbs do.

Major discoveries in planetary science will occur in 2019. Starting with the New Year’s fly-by of Ultima Thule, the farthest fly-by of an object by a spacecraft, followed by (fingers crossed) the first detection of marsquakes by the Insight lander to the collection of samples from two near-Earth asteroids and return of said samples to Earth for analysis. Amazing aerospace discoveries await!

In 2019, scientists are poised to unlock the quantum revolution. Everything from quantum computers to quantum materials holds the promise to redesign industry and influence our lives in dramatic and unforeseen ways. In the counterintuitive quantum world, particles can perform magic acts. They can be at two places at the same time, be “entangled” over great distances and tunnel through impenetrable walls.

Shades of Star Trek…will we see huge leaps forward in the understanding of quantum mechanics?

In 2019, two sets of telescopes capturing radio waves from space stand to revolutionize our understanding of black holes. The Event Horizon Telescope will provide a map of the shadow of the event horizon — the boundary of black holes beyond which not even light can escape — of the supermassive black hole at the center of our Milky Way galaxy.

Can you imagine this?

2019 is the International Year of the Periodic Table of Chemical Elements, celebrating the 150th anniversary of its discovery. While it might seem 19th century, the periodic table still has scientific relevance in the 21st century, because new elements are still occasionally found. Before the periodic table organized all of nature’s chemical building blocks, minerals from Argentina, like lithium, seemed to have no relation to potassium from Russia. Yet the periodic table shows these elements are cousins, connecting different corners of the world. Incidentally, a cellphone contains 64 elements — nearly half of the periodic table.

2019 will likely continue recent trends of being a “top 5” record warm year for the planet. It’s not out of the question that the combination of greenhouse gas-contributed warming and El Nino — a warming of waters in the eastern Pacific Ocean — could make 2019 Earth’s warmest year of the record-keeping era.

Climate change is real. We need to do more to makes ourselves reliant on renewable energies and sustainable living.

Read all 19 bold predictions from the NBC News story here.

What do you think will be the boldest discovery or accomplishment in 2019? Tell us in the comments!