This mission wasn’t merely to resupply the International Space Station (ISS), but to deliver a passel of science experiments.

To maximize its use for improving quality of life on Earth, promoting collaboration among diverse users, and advancing science, technology, engineering, and mathematics (STEM) education.

On CRS-17, there were multiple experiments on board designed to operate in microgravity on the ISS. Among them included:

Tissue Chips in Space: These USB-drive sized chips contain tissue experiments. The cool part in a nutshell: Scientists have determined that modeling diseases and pathologies in microgravity for a few weeks give them the data needed for drug discovery without animal or human trials. This means they can bring treatments to FDA for approval faster, meaning more people can be treated faster. The four chips on this mission are studying:

Genes in Space, a NASA-developed youth competition, gives students the opportunity to develop their own experiment to go up the ISS National Lab. This year’s winning team is from Minnesota. In fact, many of the team are students at Mounds View High School in Arden Hills, MN, my alma mater. How cool is that? 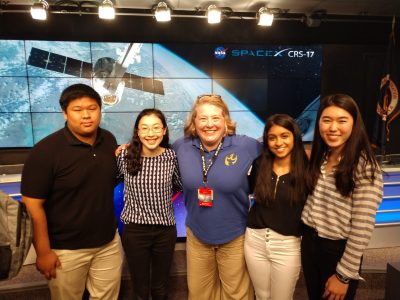 Their experiment studies how cells repair DNA in space.

According to Dr. Curt Costello, ISS Chief Scientist, there are almost 4000 investigators working on experiments on the ISS.

This briefing was completely amazing. I knew there was more than space exploration science happening on the ISS, but it was eye opening how many areas of discovery were being pursued and the opportunities for teens to participate in these explorations.